What do you do when you walk the pits and are telling a story and then it turns into, "You wanna pull it?"  I have heard promises of this several times before from other pullers, but it never manifested.

To the footage, we traveled 2 hours south to Millers Tavern Virginia for Truck Night and oh baby what a truck night it was.  There was one tractor class, but even they had truck motors, well small block motors in them.

Mark Clifford has appeared on WWPTV numerous times, but never in this capacity.  He is smart, very matter of fact, very funny, and always ready to help out.  Their whole pulling team is to be perfectly honest.  On this night, Mark was riding shotgun with me in the driver's seat.

We climbed up in the cab that would probably scare a few people away from such an opportunity.  I climbed right up, placed some cameras and we got the old girl going.  We waited for what seemed like 10 minutes.  It was really just 1 minute or so before driving on to the track.  We backed the semi up and were hooked.

This is where the magic happens.  You have to wait for the green flag, but it is coming and there was stuff to do like turning on fans, water and bringing up RPMs.  Mark handled the water injection which is usually done by a button release on most pulling vehicles.

We got the green flag and brought the RPMs up more, all the way to 2800 RPM.  We slowly let off the clutch and then Mark yelled "Smash It", and "Let's pull!"  I don't remember seeing the flagman but for just a split second.  I saw no flash, just a scoreboard climbing with glorious digital numbers.  The semi hauled the sled 380 which went 314 prior to that earlier in the night.  But once you get over the lip of the Millers Tavern track which is at 340, it is literally all down here from there.  We mashed in the clutch and pressed the brake and backed up and drove off the track. 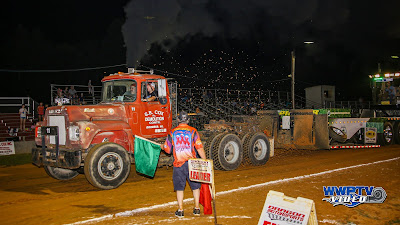 We had a good time, I know I will never forget it.  Thanks to Mark Clifford and the whole S.B. Cox crew and if you need demolition services, roll off dumpsters, portable toilets, recycling, landfill, and even ready-mix concrete give S.B. Cox a call or look them up online at www.sbcoxdemolition.com and www.coxreadymix.com.

Thanks again for all thee great videos you do.