What do you do when the one promoter that has been with you since the beginning calls and says I need you to come to my pull in central Virginia? You get your butt in the truck and go.  So I get to the track at Gladys Virginia, get some of that ridiculous BBQ, walk around, setup, and make my way through the pits.  The track is very organic in material and it was holding water prior to disc-ing.  It did get a tad dusty toward the end of the night, though as evidenced by the sled cam.

To the action, Street Trucks have been blowing up on YouTube.  They came the second class as a couple of Farm Stock Tractors pulled.  There were a total of 8 trucks, a few re-hooks, one drive shaft, and earth falling out of a Blazer.  But Donnie Gormus and his Rotten Pumpkin are hard to deny.  He won the class and has become a staple with his American flag mounted to the rear of his truck.  He proudly drives onto the track for the National Anthem.


Super Pro Farm tractors once were dwindling in numbers.  Maybe 3 or 4 Pro Farms just as recent as 3 years ago.  Well, that isn't the case anymore, baby!  The class got started by Bill Catlett from Spotsylvania.  Bill went an incredible 374.  "RESET!", that is what the guys around me were all saying!  We knew it was going to happen immediately after the run.  A 5th weight block was added.  Dustin Reynolds came next with his "Pullin' Teeth" Hot Farm International that had visited the shop of Mike Stinson at Ace Chassis over the winter.  It is sharp, so do not go up and touch it!  Sidebar, a puller recently told me this is their biggest pet peeve.  Ask if you can touch it, climb on it, etc., don't assume you can as some pullers spend a lot of money on paint, polish, and shine.  Sidebar over.  Dustin on the super sharp IH went 347 requiring a second reset.  This reset only required a gear change.  Brian Wright came next on "Blue By You" and went 324 and dropped it.  Randy Tate came back and went 248 feet down the track to follow up his excellent run at Millers Tavern. 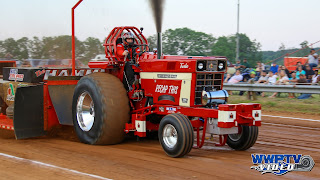 Chad Nesselrodt does more for WWP than any man on the planet.  He believed in the vision before most others.  He has done so well carrying the Big L Tire banner so high for Harrisonburg and Virginia.  He even helps out with the Keystone Nationals.  We love it anytime a sponsor does something big for the sport.  And he has been nothing but set on kill ever since his 2018 offseason by lengthening his tractor and moving the wheels more to the front of the "Recap This" tractor.  He told me after his first few runs on the thing, he could feel the changes in it immediately.


Back to the pull.  Chad took the Big L sponsored International 340.96 feet to take the top spot.  Like I mentioned on the lead it, tractors absolutely love this track.  I think it also has to do with the scrapper tractor have turf tires on it.  My only gripe is that I wish there was another one to pull a roller.  The show could have been done in 4 hours as opposed to 4 and 1/2.  But the track went back together perfectly all night long.


E L Harlow came next and put the Harlow Harvester some 317 feet from where it started from.  We were very happy to see E L.  His pull is coming up on a packed weekend on June 15 at 7PM.  The tractor last I heard was still for sale.  And it is an absolute steal. 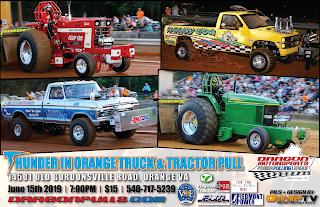 Thurman Munford Sr came next on his "Mechanical Bull".  Thurman started out and shut her down before he reached 100 feet.  He came back and started smoking fiercely halfway down the track.  He ends up at 284 feet.  I walked over and said, "It looks like you done burnt some pistons?"  He nodded.  Not the typical run for the bull.  Only rode it for 15 seconds, not his usual 20.  Billy Rice came next and we will in his neck of the woods in Sout Boston on June 22. 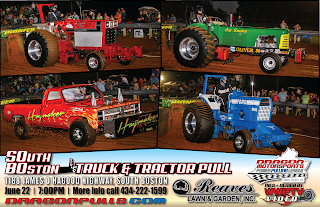 Billy came next and went 332.82 to finish second on the night.  Bill Catlett came back and went 330.29 proving the track did not go away for the later hooks.  Dustin Reynolds came back on his Hot Farm and went 323.71 for a strong 5th place for the 466 Cubic Inch machine.  And Brian Wright came and went a foot or so less than his first run.


It is glad to see these tractors out in force and there should be more blue ones running with them at the more northern pullers later in the summer.