Wim Dingerink, have a day! 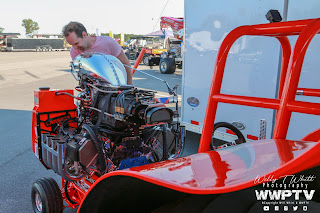 I got into the vault yesterday as part of a Facebook challenge to upload 100 videos in 30 days.  Just two days in and I am at 13 videos uploaded.  The only stipulation is that they must be 3 minutes long and have Ads.  Yes, we are still not bankrolled, so we must run Ads.  There are 7,000 miles and lots of fuel that has to be paid for and Sheetz gas stations still don't take passion as a form of payment!


GALOT Motorsports Park in Benson North Carolina United States is way back off the beaten path.  But you drive into a world-class motorsports park and you feel right at home.  There are bathhouses that compliment the dirty business of pulling, plenty of good food vendors, and plenty of gear.  And if you get a chance to check out the Shell Rotella experience, I strongly suggest it.

To the action.  There were several resets for this class.  Thank you for being patient with me on that.  But we do want good distance for the whole class and nobody wants to see the business end of every tractor that pulls past 330 feet.  So they got it right I think.  Larry Koester went 330 thereabouts for the final reset.  Then came the new ride of Kevin Teague and Test Point.  Kevin went 288 and some change.  Next was Ken Veney and his wonderful sidekick.  Ken was guided to a perfect spot on the track and piloted his ride to 310.380.  Jerry Thompson came next and went 313.400 on Hell Raiser.  Joe Eder came back and went 307.555 after a tough start his first time down the track.  Adam Koester and Beast of Burden came next and went 302.210.


Wim came next 4100 miles to get to this event.  Wim traveled all the way from Zwolle Netherlands to the States, and work his way back through the sticks to this event.  I would have to say it was well worth it for this run.  Wim went 322.875 and led 10 pullers.  We were glad to see Wim come over and I will gladly return the favor and go film him in his country soon ...


Bobcat Jr driven by Phillip Fairbanks came next and went 312.350.  It was looking like Wim was going to take this home, especially after Adam Bauer took Iron Toy to a final distance of 315.020.  But if at first, you don't succeed, drive your second Mini Rod to the top spot.  Adam took Cowboy Up to a spot of 323.295 for a big win on Friday night. 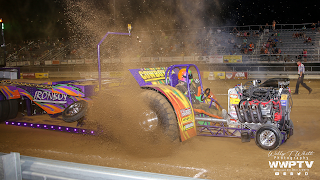 So, Wim didn't win Friday and second place at a Grand National event.  But he did win the class the second night.  To finish second and first with just one pass down the track on one of the biggest stages in the world of pulling is truly amazing.  Congrats to Wim on an awesome trip to the States.

Video of the Year for WWPTV