Millers Tavern if you didn't know has been a haven for truck pulling for some time now.  It is the official home of Modified 4x4 trucks.  There are now less than 6 Grand National trucks taking the country by storm including 2017 Bowling Green Ring winner Ben Ellis Jr and Ben Jammin' (pictured below), Region 2017 Region 1V NTPA winner Bunky Davis and Seldom Seen, and 2017 NTPA Grand National Champion Peyton Davis.

The history of pulling in this area goes back to the 70's and 80's when you heard for events and being attended by droves and droves of people.  Trucks were new to the scene and they only complimented that love black smoke we have grown to love.  Now we have the sweet aroma of racing fuel and high-performance pump gas.  If it doesn't get your blood pumping at near workout levels, have a BBQ sandwich and the tractors will be back on track in an hour or so!


On this night, Peyton Davis' Punisher truck stayed in the shop and he was tuning on the Young Gun.  Peyton's brother John T brought out The Legend formerly the old Punisher got the class started off with a run of 308.10, Kevin Schools toward the middle ran a 303.78.  And Benjamin Ellis came right in behind Kevin and ran a 301.81.  The hall of fame announcer to be, John Nicol carries comedy with him everywhere we go and I try to work it in when I can.  He introduced siblings Rebecca and Mason Brizendine running Footloose 2nd and Cutloose 3rd respectively.  He proceeded to announce Rebecca distance of 299.24.  And when Mason bested big sister he announced, "Well, tomorrow morning young Mason gets to sit at the head of the table!"  Personal and region information, as well as great stories, keep the fans entertained in a way that is long forgotten!  Which is good so I don't have to cut Florida Georgia Line out of the videos and get massive copyright violations! 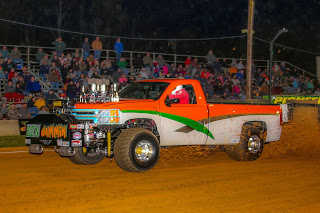 There is a long time pulling in Virginia that has been bucking a bull for 20 seconds at a time.  Thurman Munford does what he does and makes it looks easy.  Hard work is not easy!  But the appearance of such production would make one think it is.  Thurman has been pulling since the 70's.  On the live show Let's Grow Pulling East Coast edition, he told of a story where he pulled his tractor in a dump truck and almost had it roll off.  You hear so many stories around this group, you would have to think they are made up.  But like fine wine, they are simply aging well.  So in April Thurman Munford bested the Super Pro Farm class going 312.94 beating class sponsor for Big L Tire Pros Chad Nesselrodt and Recap This that went 312.94.  Thurman also beat out Bill Catlett who when 305.99 to finish out the top 3. 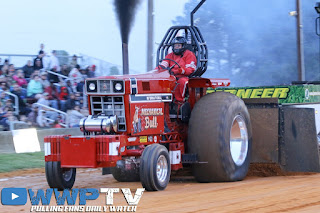 So, I know what you are thinking, you are thinking "Will. how can just trucks be this much fun?"  I film primarily a truck league.  And there is a vibe anytime you go to a new place and film.  But Millers Tavern feels more like home than any place in the world, at least to me.  But when with friends there is a buzz where everybody and their brother whips outs their cell phones, iPads, and flip phones to snap a pic of the Wheel Standing Mega Trucks.  They are the most unpredictable class getting squirrelly on the first pass and perfectly straight on the next.  They have V8 small blocks, jacked up something fierce, and pushing out some of the best fuel smells on the planet.  I am eaten up with it.  Watch the video and you will see why we say, "TRUCKS GONE WILD!" 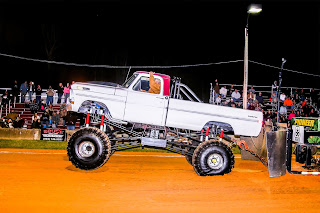